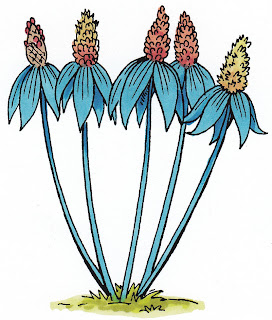 While appearing harmless from afar, the eeespaneechee is quite dangerous, due to some blood-sucking inhabitants. The eeespaneechee live in thickets and have long flexible stems and large leaves. The top most part of the plant contains a structure called the koneechee, and this is where the fruit and flowering takes place. The plant itself is not the problem, but it provides a home for the horrid eeesp.

The eeespaneechee attract eeesp colonies, and this is beneficial to the plants since it keeps other creatures from harming it. The eeesp live in clusters attached underneath the leaves, and feed off the berries. The berries contain a substance called oytuk oyl that acts as a topical analgesic. As other unsuspecting and unfortunate creatures walk through the plants trunks, the motion may induce an eeesp spawning frenzy. Oh, the horror! The eeesp jump on the creature, suck blood through the skin of its victim, and lays its egg pods. The eeesp secretes a combination of oytuk oyl obtained from its diet and a substance that they produce themselves called eeespajuice. The oytuk oyl anesthetizes the skin, while the eespajuice makes the skin more permeable for more efficient blood suckage. While eeesp infestation does not harm larger creatures including the eeesp’s favorite target the trampl een, the eeesp may cause massive hemorraging, blood loss and possible death to smaller creatures. Those wicked little eeesp, they will try to ingest nearly their entire body weight of their victims blood! What a terror! 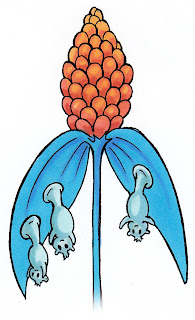 While these plants and creatures are vile in many ways, some use can be obtained from them. From the plant, oytuk oyl is extracted from the fruit and provides an excellent topical anesthetic and analgesic. As for the horrid little eeesp, juice may be extracted from them to make an intangibility potion called eeespajuice. In a concentrate form, this allows a potion soaked object to permeate through other objects. So, even a dreadful creature like the eeesp has something to offer the crown. 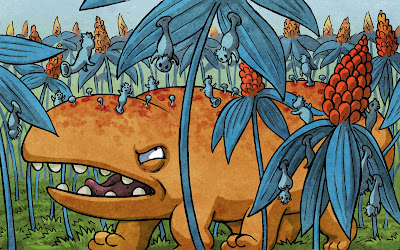 Mushrooms of the majestic forest!

A very splendid site is located just East of my most glorious castle. It is the Great Mushroom Forest, a brilliant landscape as one can imagine. Unlike many of my lands other rich and fantastic forests, this one is unique since the main planty residents are the giant proud mushrooms. While the mushrooms are found throughout the Great Mushroom Forest, they are the most dense within a pocket of this forest called the Great Grove.

While these mushrooms are a slow growing plant, they can grow quite large! Our Crutonian ancestors harvested these giants to build the houses currently found in Cruton and Bungaliville, and we still harvest mushrooms to build new domiciles and add-ons. The harvesting methods are quite fascinating! The mushrooms are cut at the base and the spongy innerds are scooped out. The husk is processed and hardened in a technique called domotashen. In addition, the core of the mushroom is edible and can be made into loaves or used as a stuffing. There are many local dishes! While mushmash and toasted mushloaf are a bit too unsophisticated for my tastes, we all enjoy mushroom stuffed poorkon every once in a while in the castle. 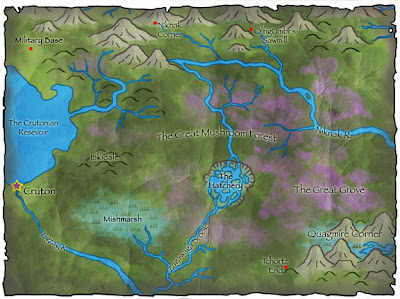