Creature of the week...Sxervian Frog!

I was having a rather interesting discussion with my esteemed colleague, Zoop (the palace Alchemist royale) about frogs. Now, I have mentioned Kroayzn frogs earlier here, but our talk was on another type, the sxervian.

Sxervian frogs are the more common of the frog varieties, and are usually, I stress usually, hard-working and loyal. I will mention a most unfortunate exception to this later. The exception are the traitorous Aphnietes.

These frogs, in general, are somewhat brutish, and yet are impressively disciplined. They have a structured militaristic society, and organize themselves into groups, then larger groups of these smaller groups, and so on. These fellows tend to form organized collectives with a clear hierarchic structure.

Here in Cruton we benefit greatly from our sxervian frog citizens. They form the main population of our security forces, under General Hoobs. Many of the frogs living in Cruton are in either the yellow or the purple brigades. These brigades are very loyal of their King, as they should be.

Sxervians breed in small pools, going there just to lay their eggs and leave. Our local Cruton frogs visit a secluded area near town called the hatchery. I have included a splendid picture here! The eggs hatch into furry tadpoles. Eventually they grow arms and legs and leave the water to return to the cities. 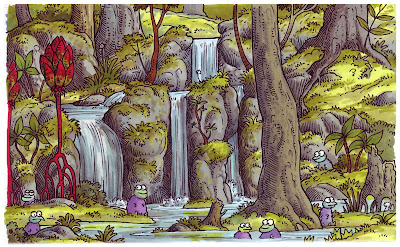