Creature of the Week... Stampede! 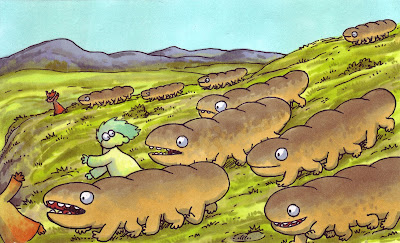 Well, as I think I mentioned earlier, my darling queen was once killed by one of these fellows... They live up north on the high plains, mostly standing around until they get hungry, then well they run en-mass until they find something to trample to death, do so and then lick up the remains!

Believe me when I say that we were lucky to come across a lone one, otherwise yours truly would probably not be here either!

Well, anyway on with my description... I am told that the mating ritual of the stampede involves two of the creatures rubbing against each other... remarkable! They don't do this often, though, due to chaffing. After a short gestation, the young exit the adults via their mouths... these then follow behind the herd and eat leftovers.

Stampedes themselves are quite delicious, and are hunted by the bungali amongst others for their meat... The young make an especially delicious dish called "stampanini" Oh! that reminds me! Time for lunch! Ta ta!
Posted by Hoonkl Snorsmed at 7:58 AM