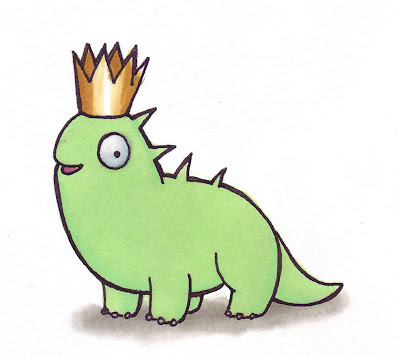 Hello all! Here is my son, Cactus! Do you see the family resemblance? No? Well he was born when I was temporarily trapped in the body of the boolgook, Umber... Due to some particularly tricky Crutonian legal protocol, he is still considered my son and heir. Don't ask me about it, but our Royal Sage, Fleeger Bn, assures me it is true.

Anyway, as it stands he is the Crown Prince and therefore heir presumptive, even though he is my second born. As I said earlier in my missive about Pooleene, she gave up her hereditary right in order to end that silly war and is now the Regent of Arkadia... such a good girl!

Anyway, back to Cactus! He is quite the little prince! He enjoys lording it over everyone, a true royal! You should see him in action! Ha ha! Alright, bye for now!
Posted by Hoonkl Snorsmed at 9:06 AM