Creature of the week...Kroayzn Frog! 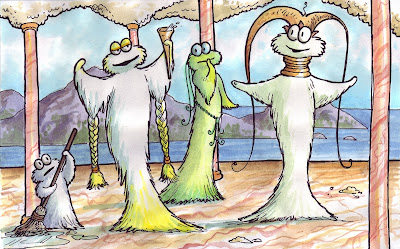 Some of the most outgoing and social creatures in town are the kroayzn frogs. Kroayzn frogs live in a highly fashionable society of their own devising. While kroayzn society is mainly centered in Arcadia, especially the city of Oshkosh, small enclaves can be found in most major metropolitan areas such as Cruton. Most of the Kroayzn in Cruton live in the Whoohookis neighborhood. I enjoy visiting there for the gourmet meals, fancy hairstyles, and theatrical performances.

The frogs are quite the socialites. The Kroayzn put fashion and their own status above all else, throwing huge parties to maintain and advance their status in the society. It is also of the highest importance to be seen in the latest fashion during these social events. A mainstay of fashion is length of hair, and often stilts are used so that hair can grow to absurd lengths without tripping its owner. 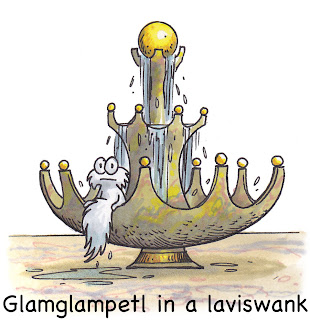 Kroazyn incubate their eggs in a fancy fountain in their homes called a laviswank. The fountain, the eggs, and the resulting hatchlings are cared for by nannies. When the hatchlings, called glamglampetls, emerge from the fountain, the household holds a glamorous coming out party called the glamglampetl Krotillion.

I have to admit that I find them rather shallow and surprised by their willingness to do anything, including disfiguring themselves or their children to advance their social status. Often they outfit their children with metal rings called whohootashen to stretch their bodies and necks to obtain greater heights. To each their own, who am I to judge? Oh yes, I am the King! It is my job to judge.