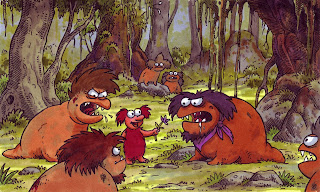 Scabees are extremely vicious creatures of central and northern Crutonia. They live in packs, in groups I think are called scaggles. Scaggles of scabee! Male scabees are called butches, and females are called velmas. The dominant butch and velma of each pack wears a bandana called a scagrag. How these odd horrid creatures get these items and put them on is a mystery to me, my citizens.

Scabees hold their rank in the pack by aggression against smaller, weaker scabees. Often, scabees aggressively attack each other and there is a lot of biting. Many young scabees do not survive due to viciousness, biting and starvation. I guess this is a way of raising their young tough, but I find it ghastly. 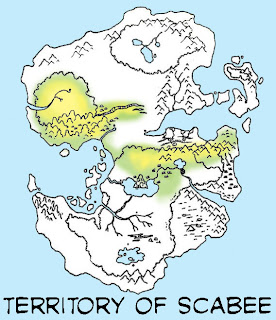 The whole scabee pack participates in hunting. Not too surprisingly, they surround the victim and tear it apart in a feeding frenzy. It should be obviously noted that scabees need to be avoided. Areas known to have a high population of scabees, such as the Praggle Pit, are considered a danger. Count yourself warned!

There are some ways to tell if there are scabees in the area. First of all, scabees enjoy napping, and if you are quiet enough you can sneak away. Second, scabees really like running. As they run together, it is easier to see them, and you can hear them too. Lastly, sometimes they shout out something that sounds like, “scabascaboooo!” They seem to enjoy doing this when they are running, too. This distinctive howl will clearly lets you know that scabees are in the area, and to head in the other direction quickly.
Posted by Hoonkl Snorsmed at 8:11 PM