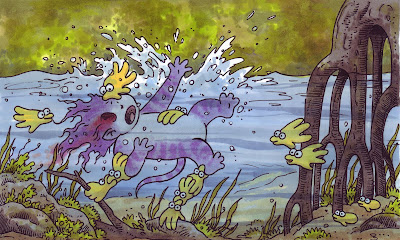 The rivers of Crutonia contain a horrible predator. While they prefer smaller prey such as the aquatic germii, eyeseatoners are opportunistic; they will dine exclusively on the eyeballs of any creature unfortunate enough to come too close. These horrific creatures live in groups called swarms, and they will use their numbers to band together to submerge and attack larger victims. These eyeseatoners do not seem interested in the flesh of the creatures, only the eyeballs. One can evade the eyeseatoner if they are quick enough to cover their faces, or have a natural defense against attack (for example the mandrian).

The good news is that the eyeseatoners are mostly restricted to the waters. They do have some limited ability to travel on dry land by walking on their digits, but this is not a common activity, I am happy to note. I have read some of the studies on how these creatures procreate. Eyeseatoaners mate by “shaking hands.” A few days later 40 or so eggs are laid. Adults anchor themselves to a nearby rock and fan the eggs for 10 days, after which the young, called mitns, hatch.