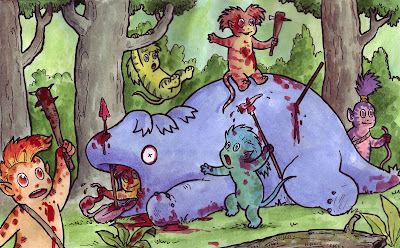 Hello, my loyal citizens! Today I will enlighten you on one of our forest creatures, the Ki. The Ki form tribes, and the strongest Ki in the tribe is the leader. The leader not only possesses physical strength, but also a strong character in terms of leadership and intelligence, much like your leader, me! Squabbling amongst the ki for leadership is relatively common. In addition to the chief, other members of the tribe have specialties, such as functioning as a healer, a weapon maker, and so forth.

When a young ki comes of age, they go on a mate-quest called the haslhof, during which they travel in the territory and sometimes beyond looking for other wandering ki to fight with for dominance. After this love battle, the victorious one of the couple will bring their ki mate trophy back to the victor’s tribe, where they are now both considered members. The conquered member of this haslhof has to renounce their prior tribe, and are sometimes even forced to join in battles and raids on their parent tribe. 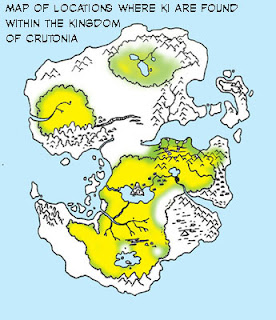 The ki are loyal to their tribe, but tend not to mingle with other ki groups, and are downright warlike against their enemies the valients. Ah, these valient fellows are also forest dwellers, living in groups in a similar fashion to the ki. I am not sure where all the hating comes from. It is all very uncivilized! The valients build tree homes, and since they are semi-nomatic, tend to abandon them after a while. The ki will then occupy these vacant homes. I do not see this home sharing as the source of the discourse between these two creatures. Rather, it is due to the two groups, usually the ki, raiding and pillaging each other’s tribes. What crass creatures, I am glad they stay in the forest rather than create a nuisance in the towns, I’ll say.