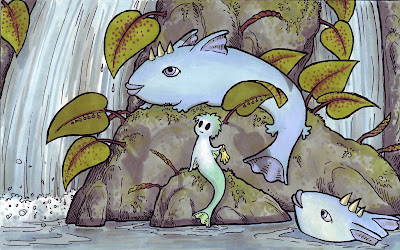 There are creatures that reside on the Aquarius Mountain, and are unique to it. They are the elusians and mandrians! Elusians are midsized semi-aquatic fish that are relatively intelligent but lazy. You can visit and try to carry out a civil conversation with them, but they are usually uninterested and sometimes rude. They are dependent on the smaller, more agile, but less intelligent mandrians to supply their main food source, the eggs of the conshahawkun (called conshabrine).

The two creatures have quite the cooperative relationship. While the elusians do appear to be rather lazy, they will carry the smaller and weaker mandrian up the mountain to harvest conshabrine so they can eventually be fed. The mandrian have an unusual method for collecting the conshabrine. Mandrians capture the vicious eyeseatoner fish, and use their hides as bags to collect conshabrine. For those of you who know about these eyeseatoner creatures, and their propensity to attack and eat out the eyeballs of poor unfortunates that happen to be trapped in the water with them, you may wonder how the mandrians manage to avoid this horrific fate. However, mandrians are immune to the attack of eyeseatoaners, because of a transparent sheath over their eyes. Too bad for the eyeseatoner! The mandrian fill their eyeseatoner sacks with braleetberries and hang them deep in the underwater caves where the conshahawkun live. Attracted to the berries, the conshahawkun crawl into the bags and feast. While they feed, they lay hundreds and hundreds of eggs. When the food runs out they leave the sacks filled with eggs, and then mandarins eventually come back and collect them up!

Besides the obvious reason for the elusians to stay at the mountain, namely their blatant laziness, they also need the natural terrain of this region for their reproduction. These creatures need the strong current within the mountain to breed. They lay their eggs (called dingulbells) on the interior of a mountain or near the vents in the sea of bubbles. Soon, the munsmells (newborn elysians) hatch and swim into the tunnels for protection and to feed on the conshahawkun eggs. After a while the munsmells are too big to fit in the tunnels and move to the in the lake, and eventually join the adults in their idle lifestyle.